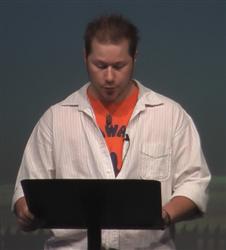 I worried a lot.  Still do, but back then I worried about anything and everything and I would think about whatever it was constantly. For the most part, I was a good kid…not a great kid…but a good kid growing-up!  I had the middle child syndrome, so I did whatever it took to steal the attention away from my younger brother or older sister.  I was the kid with the short temper, bad attitude, no patience and a lot of obsessive compulsiveness.  The inside of my head was a disaster zone.  I wouldn’t back down from anyone or anything…if someone said I could do it…or it couldn’t be done…I did it anyway…either to break the rules or prove them wrong.

I was raised in “the traditional” church, and like a lot of kids at my age at the time; I felt force-fed with religion and stereotyped all denominations to be like the church I was attending.  Until one Sunday my pastor at the time had asked me to join him in delivering prayers and communion…I had become the youngest assistant to the pastor at our church (little did I know at the time, that he was trying to set an example to the other misfits that apparently looked-up to me).  Being the assistant to the pastor had greatly effected me…so I’m not sure if his plan backfired or not, but I do know that I was seriously considering seminary, and have always toyed with that notion…scary isn’t it?  Dan and I could have been roommates!!!